Wowza Media Systems, the provider of media server software for streaming media solutions, announced the launch of Wowza’s Premier Channel Partner Program. The program should recognize top-producing resellers and distributors of its Wowza Streaming Cloud solution and ensure better collaboration between such partners for continued growth. 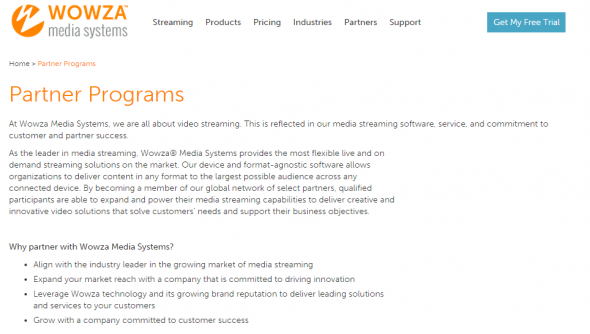 The company will be shortlisting participants to its new program by their previous engagements, commitments and investment and provide its Premier Channel Partners with multiple benefits like quarterly sales workshops, joint marketing initiatives and technical support. Ambient Media, Bor Yazlim, Computers Infinite, Gee Solutions, HANSAN INTWORKS, JB&A Distribution and Taeyoung MC are just some of the participants.

CDNetworks, the multinational CDN provider with network infrastructure across six continents and local expertise in mainland China, announced that the Company has achieved PCI-DSS (Payment Card Industry-Data Security Standard) Certification from a PCI Qualified Security Assessor (QSA) for the fifth consecutive year. Adhering to PCI-DSS’ stringent standards is CDNetworks way of showcasing to its customers that the protection and security of their sensitive data is of prime importance to CDNetworks and stands as a milestone of quality.

Google announced that the autoscaling feature for its Google Compute Engine cloud infrastructure service is now out of beta and generally available to everyone. Now developers can automate the process of provisioning more or less cloud infrastructure. They can make rules based on average CPU utilization, the number of web requests per second, and other metrics. Other public clouds, like Amazon Web Services and Microsoft Azure, can also be set up to automatically scale based on usage. In addition to rolling out new features, the Google cloud also occasionally cuts the prices of its raw cloud infrastructure.

Samsung’s new Gear S2 smartwatch will ship with Uber, ESPN, Yale, Nike, and CNN apps on board. Those app developers, and others, were given early access to the Gear S2 software development kit (SDK), which Samsung officially made available to all developers today. amsung said more than a thousand apps will be available when the smartwatch launches. This is in addition to the 5,000 apps already available to Samsung Gear users. The new watch runs on Samsung’s own Tizen operating system.Samsung also points out that the Gear S2 can be synced with certain Android phones.

China’s Loongson Technology has designed two 64-bit, quad-core Mips processors that can also execute code based on the x86 (Intel-compatible) and ARM architectures. The Loongson-3A2000 and 3B2000 chips are based on an enhanced version of the MIPS64 architecture called LoongISA. These four-way superscalar processors are built on a nine-stage, super-pipelined architecture with in-order execution units, two floating-point units, a memory management unit, and an innovative crossbar interconnect. That means the designs are pretty sophisticated and could be used in desktop computers, laptops, and servers.Loongson has roots in common with Lenovo, as its founders are also from the Chinese Academy of Sciences and the Institute of Computing Technology.