Why You Should Switch From MPLS to SD-WAN

Multinational corporations have traditionally needed global MPLS services to build their WAN. Until recently, there simply was no alternative. That has changed now that secure, global SD-WAN as a Service is available worldwide.

But as business has evolved so too the network perimeter has dissolved. Fixed locations have given way to mobile users, corporate applications to cloud services, and servers to cloud instances. Security threats have skyrocketed, and so have our security appliances. No longer is there a safe corporate network and dangerous Internet – there is only the network.

By leveraging the power of distributed software, plentiful IP capacity, and off-the-shelf hardware, SD-WAN as a service provides a reliable, flexible, and inexpensive alternative to MPLS.

Global Multiprotocol Label Switching (MPLS) networks allow for different in-country providers of MPLS services to connect as one network. A single service provider acting as a “general contractor” manages the agreements between the individual MPLS providers to allow the customer to traverse between the MPLS links of one SP to another to complete the global WAN.

Unfortunately, the realities of today are very different:

The fact is, global MPLS services aren’t implemented in a way that accommodates the new realities of wide area networking needs. Clearly, an alternative is needed, but it’s not the public Internet. When looking at a global deployment, the Internet is too unpredictable.

SD-WAN as an alternative to MPLS

There are different approaches to architecting an SD-WAN. Many vendors’ products would have you build and manage your own network using the unpredictable public Internet and overlay the SD-WAN on top.

SD-WANs reduce bandwidth costs by leveraging inexpensive services, such as Internet broadband, whenever possible. They can still use dedicated Internet access (DIA) for higher uptime and performance. (DIA is often more expensive than broadband but less than MPLS and comes with some service guarantees.)

The main goal of SD-WAN (SDWAN) technology is to deliver a business-class, secure, and simple cloud-enabled WAN connection with as much open and software-based technology as possible.

Companies are rapidly adopting SD-WAN technology because of the comprehensive financial and operational benefits it offers:

Despite all the advantages, SD-WAN has some limitations, namely:

SD-WAN as a Service (SDWaaS)

SD-WAN as a service (SDWaaS) takes a far different approach—one which we believe creates a better network that can truly serve as an alternative to a global MPLS network.

With an SDWaaS, the Internet is only used for what it’s best at — access. The middle-mile, the part of the Internet that causes the biggest latency problems, is replaced by a global, SLA-backed affordable backbone. 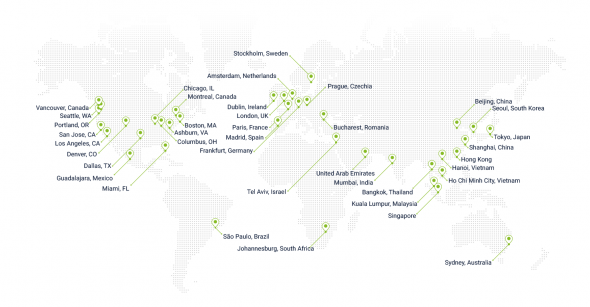 The PoPs are meshed into a global overlay with at least two SLA-backed global carriers connecting every PoP. Using the inexpensive IP capacity available from tier-1 carriers is one ingredient that allows GlobalDots to dramatically reduce the capacity costs. Costs are also reduced by relying on distributed software running on off-the-shelf hardware in a redundant configuration; there are no expensive proprietary appliances.

With an affordable, SLA-backed backbone, SD-WAN as a Service can replace a global MPLS deployment. If you have any questions about how we can help you connect all your business resources and data centers into a secure, unified network, contact us today to help you out with your performance and security needs.