Home Resources Blog What is SPDY?

Communications protocols are what make the internet tick. Consisting of digital rules that govern the way that messages and data are exchanged between computers, they are integral for the smooth running of any computer or network, both global and local. Over the years, many protocols have been developed, each offer specific advantages over those that came before it. A new protocol, known as SPDY has recently started gaining popularity, but what is SPDY and how can it benefit you?

SPDY (derived from the word ‘speedy’) is one of the newest communications protocols and its development is being spearheaded by Google. With the aim being to provide a standardised build of the protocol, the team behind its development are committed to creating a protocol that reduces page load times compared to the similar protocol HTTP. Whilst providing better performance than HTTP, the goal is not for SPDY to replace HTTP, but rather modify the way in which it is used.

SPDY must be supported by both web browsers and web servers in order to work, and it is currently supported by Chrome, Firefox, Opera and Internet Explorer. There are several performance-based benefits to using browser that support the SPDY protocol: 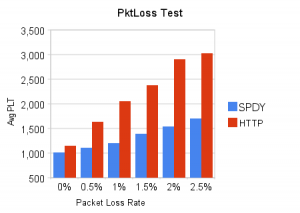 Packet loss comparison between HTTP and SPDY. SPDY clearly comes on top, with a much lower level of packet loss.

These points all mean that SPDY can deliver some strong performance increases when it comes to delivering data online. Google’s whitepaper on SPDY claims that these performance improvements could range from 27% – 60% compared to page load times across TCP without SSL and 39% – 55% compared to TCP with SSL. These are some serious speed improvements.

In addition to these performance gains, SPDY also contains some significant security enhancements. This is because all current iterations of SPDY have SSL (secure sockets layer) built in and mandated, providing encrypted traffic at all times. This is great in a world where secure browsing is increasingly become a concern for most users.

SPDY is an exciting new development in the web industry and its push to becoming standardised is certainly a great thing. As more browsers and web servers make use of the protocol, we will see ever increasing performance benefits across a number of different websites and applications. And when used in conjunction with advanced web acceleration technologies such as content delivery networks, we will begin to experience how the web of tomorrow might look and feel.