Home Resources Blog DDoS Attacks are on a Sharp Rise, Bots are Muddying Your Marketing Analytics & More in This Weeks News

DDoS Attacks are on a Sharp Rise, Bots are Muddying Your Marketing Analytics & More in This Weeks News

Distributed Denial of Service (DDoS) attacks are on a sharp rise

DDoS attacks have nearly quadrupled in the past year alone and according to Verizon‘s research, the rate of DDoS attacks rose from 4 percent in 2014 to 15 percent of attacks in 2015. In numbers this means 2,435 reported attacks in 2014 and 9630 attacks in 2015. This report also features a number of recommendations for DDoS Mitigation which Verizon has implemented in their security strategy. 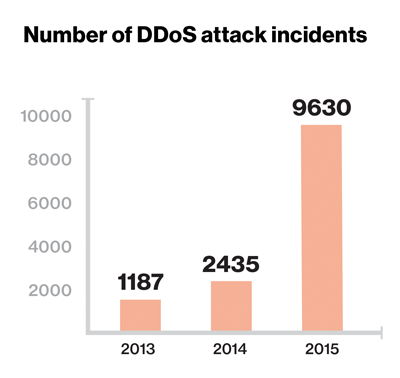 Bots are muddying your marketing analytics

Bots often get bucketed as a security problem and marketing avoids to even think about them. This, of course, is bad because retail bots can contribute up to 30-40 percent of a retailer’s traffic (as an example). A/B testing, campaign effectiveness, bounce rate and similar data may be completely false and your marketing team may be conducting new tests based on data which isn’t realistic. Free solutions for the problem are usually not the best solution and Akamai in their article suggests purchasing a solution from a reputable vendor if you really want your problem fixed and be worry-free from bots.

InstartLogic published an article about measuring the impact of ad blockers on website speed performance. It turns out there are more than 100+M active Adblock Plus users and this extension impacts page-load time for them. More specifically, your users speed of loading content is reduced if you have none or a few ads on your page and actually increases if you have many of them. Here’s a short preview of the results:

In San Antonio on July 7th, 2016, Rackspace announced on the Microsoft Worldwide Partner Conference that they will be offering the ability to resell and refer both Microsoft Azure and Microsoft Office 365 to companies in the Rackspace partner network from them as a 2-Tier Microsoft Cloud Solution Provider (CSP). This means their channel partners are going to be able to deliver these tools to their costumers, while receiving industry-leading Fanatical Support from Rackspace which includes direct billing, provisioning, management and support.

CDNetworks announced that it has expanded its reach in Mainland Southeast Asia with new global telecommunications business and newly established PoPs (Point of Presence) in Myanmar. This increases network coverage to 13 locations throughout this region.

“As a global content delivery network, CDNetworks’ coverage in Asia is second to none,”
“Increasing our customers’ reach throughout Mainland Southeast Asia helps them tap into a fast growing market.”
– Toru Maruta, CTO of CDNetworks