A new Distil report reveals that bad bots nearly doubled in their percentage of all web traffic between the periods of Q1 2013 and Q4 2013, jumping from 12.25% to 23.6%. The growth of bad bots over good bots provides an omen of the Internet’s future state. In fact, new bad bots continue to rise during the first three months of 2014.

Bad bots are now representing nearly a quarter of all web traffic. During the last year Distil firm detected bad bot traffic originating from every wireless provider operating in the United States, botnets are targeting mobile platforms, the illicit activities grew up of more than 1,000 percent in the last 12 months. The financial services industry is the one that serves up the highest botnet traffic. 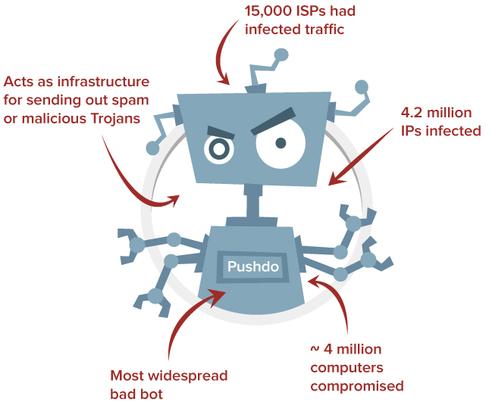 Other findings from the report also suggest that more bad bots originate in the USA than any other country and that Amazon serves the most bad bot traffic among hosting providers worldwide, tracking at 14%. Mobile bad bots are far more widespread in the US mobile networks than those of other nations.

View the full story at SecurityAffairs.

For the full Distil Networks report go to: http://info.distilnetworks.com/distil_bad_bot_report_2014

MaxCDN announced the launch of tools.maxcdn.com, which allows customers to view, compare and revise their website’s performance at 14 places around the globe. It supports a Ping test and an HTTP Speed test, comparing the time taken between the first and the last byte transferred. It allows entry of 2 domains and provides a comparison chart. MaxCDN is providing tools.maxcdn.com for free, helping the website owners boost their performance and customer support.

For more on MaxCDN and the launch of tools.maxcdn.com go to this blog post.

Pacnet, the leading provider of networking and CDN solutions in the Asia-Pacific region and China Telecom have announced a strategic partnership to improve the data center and CDS (cloud development solutions) in Chongqing, the largest growing city in China. China Telecom will add new Points-of-Presence (PoPs) in the CQCS1 and Changqing data center becomes the property of Pacnet, connecting China Telecom’s network with Pacnet’s global network.

This will result in a low latency and high-performance and bandwidth connectivity between the network providers, putting Chongqing on the map for advanced cloud computing services. Pacnet issued a statement saying that they are happy with the partnership, being the only foreign company to date that is licenced to provide data center services in Chongqing.

Read the full story at CDNAdvisor.

Mrs. Sheila Bouman, the Chief People and Performance Officer of PEER 1 Hosting has been promoted to the position of Executive Vice President and Managing Director, where she will continue to help the Company grow and ensure high levels of customer satisfaction. The management of Cogeco Cable thanked to Gary Sherlock for his leadership sint at PEER 1 Hosting and wished him good luck in his future endeavors.

Internap Network Services Corporation, one of the largest providers of scale intelligent IT infrastructure solutions, announced the enhancement and the upgrade if it’s patented Managed Internet Route Optimizer (MIRO) solution, improving the consistency and the performance of it’s offering to it’s customers. The next-gen MIRO solution can keep up with the demands and is targeted to ensure better QoS for all it’s customers. the next-gen MIRO reduced network latency by 44% to 64%, identified and routed through best-performing network path up to 99% and reduced the traffic delivery variability by almost 400%.