Silicon Angle compiled 20 statistics that every CIO should look to store in their memory for future reference or for ground to stand on when bringing a cloud proposal to the rest of their executive teams. By 2015, end-user spending on cloud services could be more than $180 billion, the first prediction states. Also, it is predicted that the global market for cloud equipment will reach $79.1 billion by 2018, throughout the next five years, as well as an 44% annual growth in workloads for the public cloud versus an 8.9% growth for “on-premise” computing workloads is expected. Moreover, Cisco forecasts that global data center traffic will triple from 2.6 zettabytes in 2012 to 7.7 zettabytes annually in 2017, representing a 25% CAGR… Global data center traffic will grow threefold (a 25 percent CAGR) from 2012 to 2017, while global cloud traffic will grow 4.5-fold. The list gives a valuable insight into emerging cloud computing landscape.

Most Used Cloud Apps: In Pics

Netskope cloud analytics company released an infographic relying on their quarterly report about most used cloud apps. Enterprise employees are using an average of 397 different cloud apps, ten times more that was previously estimated, and using it for virtually every business function. Twitter seems to be the most popular, while 3 of the top ten cloud apps are storage. See full infographic here and a snapshot below. 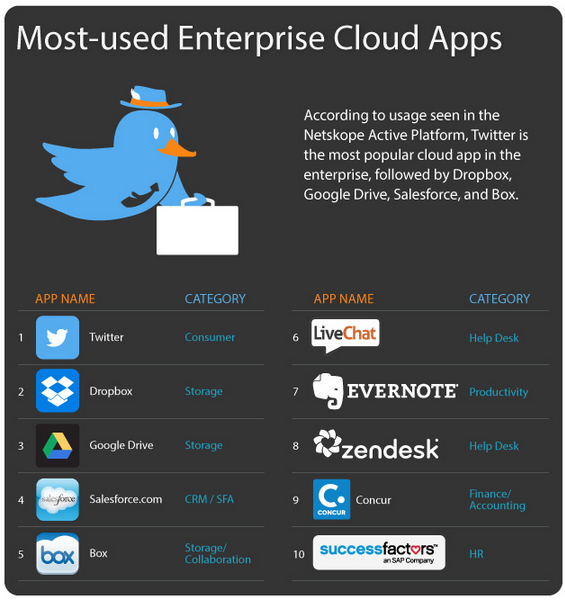 Structure Data: Video is the Next Big Thing

“It looks like video is emerging as the next great source for companies to learn about consumers, and for everyone to learn about the world around them,” says Derrick Harris at GigaOM and introduces one of the hottest themes for Structure Data conference scheduled for March. “Thanks to surveillance cameras, GoPros, Dropcams, cell phones and even old-fashioned camcorders, we’re able to record video at unprecedented scale. YouTube sees 100 hours of new content added every minute. But it has been kind of a wasteland of information.” Techniques that are helping to learn more, recognize and categorize those videos are about to develop in the near future and bring about new source of business intelligence.

Read the full article at GigaOM.

Tablets are Taking Over Desktop PCs in E-Commerce

The average transaction value breakdown between mobile, tablets and desktop PCs from Ayden online payment company, based on its online traffic handled in the fourth quarter of 2013 shows that from the e-commerce side, tablets are taking over from desktop PCs, reports GigaOM. Also, it proves that merchants who have a proper mobile app or have created a web responsive site have on average 10-15% higher conversion rates than those who run a desktop-oriented business. See the breakdown of figures below for travel, retail, digital goods, ticketing and gaming. 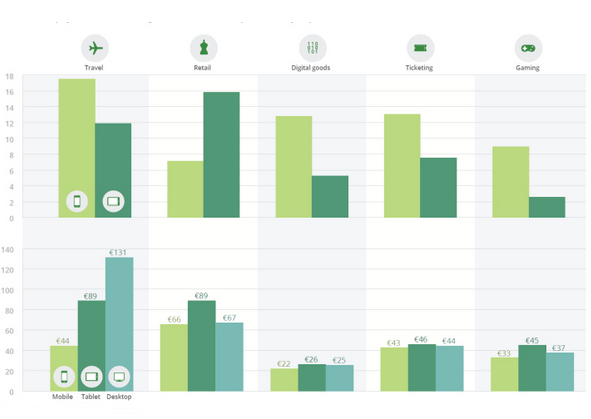 Amazon Web Service announced new reporting tools for their EC2 cloud computing platform. A pair of interactive usage reports, i.e. the Instance Usage and Reserved Instance Utilization reports, is now released that that can be accessed from within the AWS Management Console. These reports give insights into instance usage and usage patterns, and provide with information that is needed to optimize EC2 usage. AWS users can use these new reports to track both their regular EC2 instances and reserved instances. The EC2 Instance Usage Report displays historical usage and cost data for EC2 instances. You can control the time frame and granularity (monthly, daily, or hourly) of the report and you can filter on a number of instance attributes including availability zone, instance type, purchase option, consolidated billing account, tag, and platform. The EC2 Reserved Instance Utilization Report displays hourly and total costs for your Reserved Instances, including cost savings when compared to On-Demand instances. It also displays average and maximum utilization rates for your Reserved Instances with respect to the selected time range.

More about this can be found in the official release, and also on TechCrunch.