MPLS or SD-WAN – Which is Better?

With the advent of the digital age, what was unimaginable just a few decades ago is now possible.

Reaching a single person, or distributing data, over long distances would easily take weeks or months a century ago. In today’s global village, it’s a matter of seconds – if that.

We are able to reach and communicate with every part of the globe where the Internet has stepped foot. This global reach is what further propelled the last decades of global interconnectivity. Globally connected organizations are the norm nowadays. 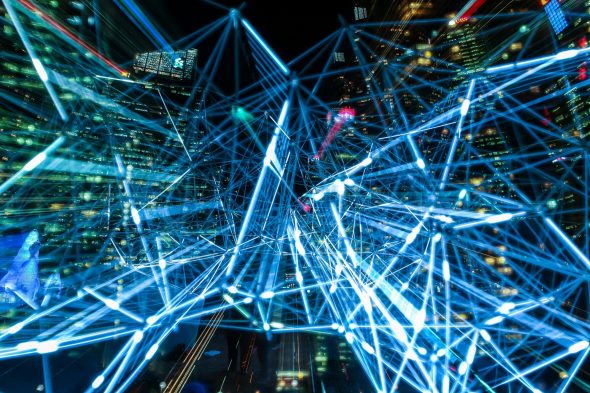 A global company easily communicates and distributes data between HQ and branch offices, coordinates employees and holds video conferences, informs and satisfies buyers and suppliers, no matter where they are located. By setting up its own Wide Area Network, an organization holds control over its own “internal internet”. WANs enable them to communicate and relay data effectively and regardless of location.

As more and more critical data is moved across those networks, the speed and security aspects, along with associated costs, became a growing issue. In order to keep their network’s perimeter safe, IT departments had to build and maintain a secure and high-performing infrastructure. Specialised hardware and personnel are required for that.

The MPLS and its Ups and Downs

The total cost of ownership for keeping hardware and personnel up-to-date in an ever-evolving threat environment implies significant investments. For long, the only logical option for a high-performing WAN was through the use of MultiProtocol Label Switching techniques.

Simply put, MPLS is the data transfer technique used in high-performing networks. It attaches labels to packets and directs data from one node to the next based on label instructions rather than on network addresses. The labels function as virtual paths between nodes. That way it avoids complex DNS routing table lookups. The MPLS also incorporates various network protocols – hence the attribute “multiprotocol”. It’s the best solution in terms of sheer performance.

Tweet this: As businesses and markets evolve, network perimeters dissolve

As we moved further into the digital age, with increased interconnectivity, cloud services, SaaS, IoT and big data around, the safe perimeter became increasingly expensive, adding complexity to networks and making it harder to maintain.

To put it poetically, as businesses and markets evolve, network perimeters dissolve. Fixed locations have given way to mobile users, corporate applications to cloud services, and servers to cloud instances.

Legacy WAN architectures based on MPLS do a good job providing predictable performance between offices. However, they’re not implemented with the new IT realities in mind. Mobile users connect through VPNs and firewalls, cloud access goes through unsecured Internet, not MPLS. On top of all, users are consuming more and more bandwidth, which is an expensive resource in terms of MPLS networks.

SD-WAN is the Next Logical Step But…

It’s why many have embraced Software-Defined Wide Area Networks (SD-WAN) as the preferred solution to the growing WAN security and cost issues.

SD-WAN brings the ability to handle policy configuration and route calculations through a central SD-WAN controller, rather than treating the network as individual routers and locations. Instead of relying exclusively on private MPLS services, SD-WANs connect branches through any type of data services. That includes Direct Internet Access (DIA) services like xDSL, cable, LTE, but also through MPLS. 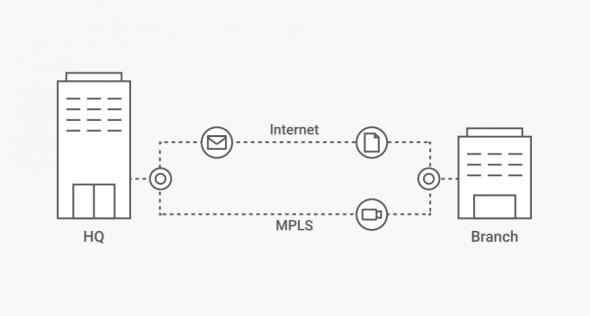 Tweet this: Need to replace your WAN with a more affordable and agile one?
An SD-WAN will work, but…

However, if we only look to replace yesterday’s WAN with a more cost-effective and agile WAN, then a simple SD-WAN solution is all that is required. But there are still discrepancies between today’s mobile, cloud-centric companies and legacy network architectures. For having SD-WAN providing a real step forward for enterprise networks, a larger, holistic approach is required.

A rethinking of high-performing networking with new technologies, security, and costs in mind is the only viable long-term option. By bringing Software Defined Networking principles to the WAN, SD-WAN can address many of those tactical challenges.

SD-WAN nodes use all available information, along with gathered latency and packet loss data stats, to steer the traffic onto the optimal network connection.

For example, email replication, file transfers, and other bandwidth-intensive apps may be sent across an Internet path, while sensitive VoIP sessions would be sent through MPLS (or other low-jitter, low-packet loss Internet path).

The Convergence of Security and Networking

Rather than deploy SD-WANs to meet IT requirements, CIOs can use this opportunity to rethink and upgrade their WAN to address the root problem – the dissolved perimeter.

In its basic philosophy, the WAN must be as simple as possible. More components require more equipment and personnel but also increase the chance of something going wrong. By creating a single network with one set of policies for all locations, all users (mobile and fixed), and all destinations, CIOs and their teams can build a better and smarter network.

They must strive for the performance and predictability of an MPLS and the agility, control and cost savings of SD-WANs. By leveraging algorithms, virtual appliances, and cloud capabilities, both security and networking requirements can be met, and even topped. 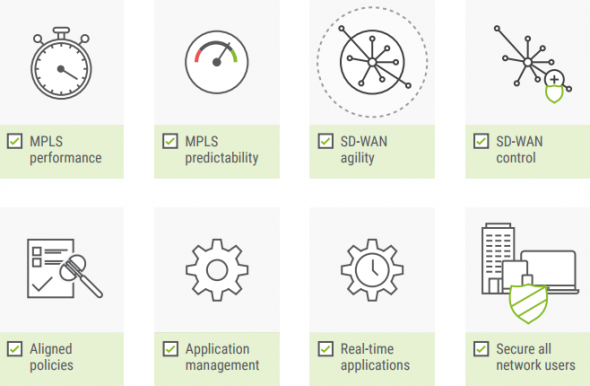 Tweet this: A unified N+SaaS approach gives CIOs an opportunity to rethink their WAN networks

Rising in popularity is the unified Network+Security-as-a-Service (N+SaaS) approach. It moves all security, traffic steering and policy enforcement on cloud services built on top of a robust managed network backbone. A N+SaaS offering is also what we advocate here at GlobalDots.

While SD-WANs are a valuable evolution, N+SaaS takes it a bit further and pushes a broader vision of networking and security.

As more and more companies migrate to the cloud, their data and apps are driven by a mobile workforce. A single security framework with fallback options for all users and apps makes overall IT agile and reliable.

Both MPLS and SD-WAN are to be considered in every network setup where a high-performing and reliable communication is required. It’s the cost and security aspect that stirs things up. The discussion on “which is better” becomes trivial when they are considered as components in a broader N+SaaS grand scheme of things. Each carries its own sets of advantages as well as costs. Convergence of network performance and security is the future, and you should adapt and plan accordingly. The best option is the one you can afford and that keeps your network simple and safe for the future.

In case you want to discuss your N+SaaS options, or simply want to know more about getting the most out of your security and performance options, you can talk to one of our in-house GlobalDots experts. They can help you with anything web performance and security related.