How to Reduce the Cost of Your AWS Bill

Have you ever looked at your AWS bill and wondered how on Earth you ended up paying so much every month? The odds are the biggest slice of that bill is from EC2, and most likely from the cost of running instances (servers).

It’s a common problem and the good news is that it has already been solved! By utilising Amazon spot instances for your workloads you could be saving up to 80% on your EC2 bill. It sounds sounds too good to be true, right? Well that’s what I thought when I was shown the technology, one year later I’d quit my job and now I’m writing blog posts about it. The biggest issue I have is convincing people that I’m telling the truth!

Your application is then up and running on a spot instance instead of a full price, on-demand instance. You’re already saving up to 80% at this point. The really clever part is that the algorithm that runs the bidding engine also knows when AWS are going to take the spot instance away from you. With this information it ensures to get you a replacement spot instance, migrate your application and continue as if nothing had happened, with 100% uptime.

Not only that but rather than the measly two minutes that AWS gives you to migrate, this algorithm allows for fifteen minutes application draining (nearly 8x more time).

How do I integrate it?

No install required and practically no configuration, you just need to allow a cross account role for the service and you’re away. You can be up and running in as little as 5 minutes. Now you’re probably wondering what workloads can be run on spot instances, good news is that the engine is already natively running:

No catch, you only pay for the service if you’re utilising it. If you stop using it, you stop paying, there’s no contract. Too good to be true, right? I know, I’ve heard it too many times, but don’t take my word for it, just see actual screenshot of a customer installation. 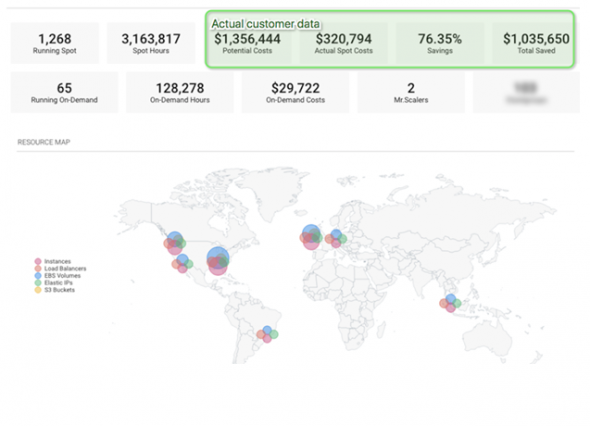 Want to know how you could be making these kinds of savings? Get in touch with our specialists for a demo today.